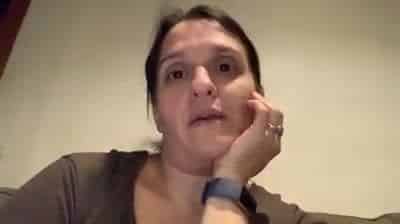 "I own my story, I can control it and I can tell it the way I want to."

Hi, my name's Amy. I'm here to tell you my CTC story. It has been my dream, for as long as I could remember, to be a mother especially to a little boy. It was a very long journey to become a mother. My husband and I didn't find each other until we were in our thirties. Not long after we got married, he was diagnosed with testicular cancer and we were told we couldn't have children. Four years later, we got pregnant. I lost the baby.

Then in June of 2015, we were blessed with a beautiful baby boy. He was the happiest baby. I felt like my dream had come true but by the time he turned 2, my happy baby had turned into a very aggressive toddler. He was having epic meltdowns that felt like they lasted forever; hitting, biting, hurting the dog, hurting his friends. We were scared that when we picked him up from daycare that it was going to be the day we were told we couldn't bring him back. It had become a nightmare. Parenting was so much harder than I thought it was going to be. I didn't want to be a mother anymore. I didn't like my little boy. That's a terrible thing to say but it's how I felt. I daydreamed about running away.

Then, I discovered the free CTC workshop through another parenting website for aggressive boys and decided to sign up because it couldn't make things worse. Implementing the framework, I immediately started to see my happy little boy again - even when he was in the middle of a meltdown, I could see him. I found my joy in being his mother again. It’s a year later things aren’t perfect but I'm becoming okay with that. Do we still have meltdowns? Yes, but I would no longer describe them as epic. They don't come out of the blue anymore. I know where they come from now. CTC has changed my parenting and my outlook on the world. In fact, I don't know how I would have gotten through the past few months the way the world has been without what I've learned from CTC. I will be forever grateful to Dayna and Jason and the CTC team, for showing me that I own my story. I can control it and I can tell it the way I want. Thank you.