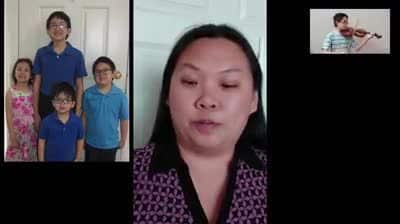 "Now it is that good kind of chaos that comes of four kids growing up together."

Hi my name is April and i have four kids aged between 4 and 12 years old. Before Calm the Chaos my life was chaotic. There was constant fighting and hitting between the four siblings. I had tried bribes, punishments and reward charts. None of it worked. I had always felt my family were supposed to be a team and work together but that just wasn’t how things were. I had tried so many things before, why would this be any different?

But it was different. I needed to start with myself, changing how I see myself and the children. I had conditioned myself to seeing only the hitting and the refusals and tantrums that I wasn’t always seeing the children. Their own little personalities. I began to look at them in a new way. Instead of hitting, now I see the frustration of being left out. Instead of refusal, I see their overwhelm. I see them and not the problems.

And it turns out the answer was simple. Connection time with each kid and huddles. We began working out things together. Now the toy room has been cleaned up together every Saturday for 8 weeks.

I still yell sometimes. But now I see progress not perfection as the goal so I don’t beat myself up. I don’t wallow in self pity anymore. I look at what went wrong and figure out what to do better next time. Our family is still chaotic but more and more often it is that good kind of chaos that comes of four kids growing up together and trying to figure out who they are in the world.